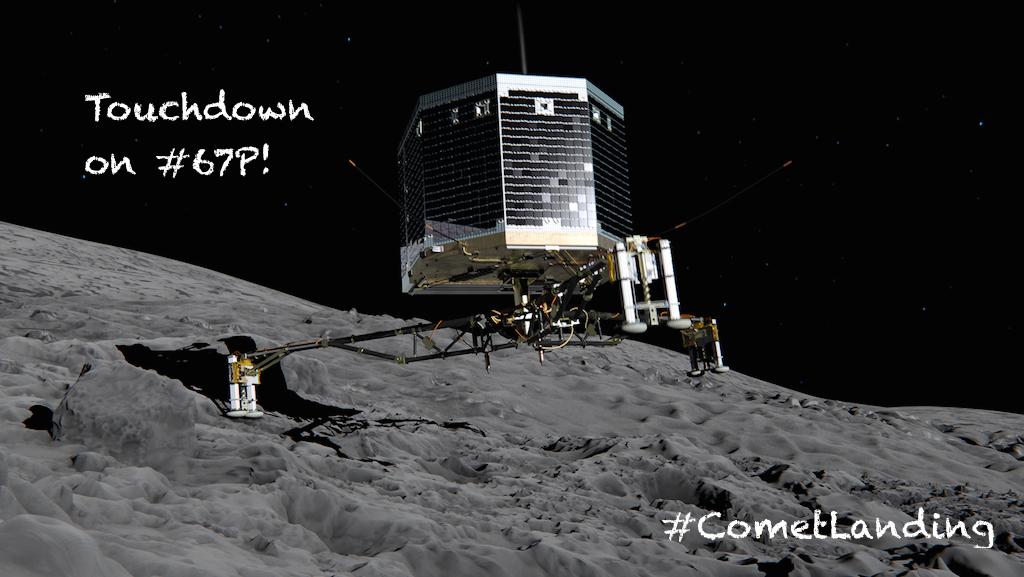 The comet lander Philae has awakened from a seven-month hibernation and managed to communicate with Earth for more than a minute, the European Space Agency (ESA) said Sunday.

The probe became the first spacecraft to land on a comet when it touched down on the icy surface of 67P/Churyumov-Gerasimenko last November. Shortly after its historic landing, Philae managed to conduct several experiments and send data to Earth for about 60 hours before its batteries depleted and it was forced into hibernation.

The German Aerospace Center, which operates Philae, said that the probe resumed communication at 10:28 p.m. (2028 GMT; 4:28 p.m. EDT) on Saturday, sending about 300 packages of data to Earth via its mother ship Rosetta, which is orbiting the comet.

As with everything from the moon landing to the death of Elvis, an alternative version of “what really happened” as the Philae probe landed on comet 67P did not take long to emerge.

According to an email published on the website UFOSightingsDaily.com, which does a regular trade in alien sightings, the mission was part of a European Space Agency and Nasa cover-up to disguise the comet’s true alien nature. The email, allegedly from a secret whistle-blowing employee of the ESA, accuses the agency of “blatant cover-ups” in wanting to land on the speeding comet and attaches photos which claim to reveal the “true inner workings of Comet 67P”.

Do not think for ONE MOMENT that a space agency would suddenly decide to spend billions of dollars to build and send a spacecraft on a 12-year journey to simply take some close-up images of a randomly picked out comet floating in space.

Some 20 years ago Nasa began detecting radio bursts from an unknown origin out in space. It would later be known that these had likely come from the direction of the now named comet 67P. It does show signs on its outside of machine like parts and unnatural terrain.

Ending on an ominous note, the letter adds: “Whatever this object is, it did not ask to be found or scrutinised.” (cue dramatic music sting)

This is far from the only extra-terrestrial conspiracy theory put forward about 67P and the ESA mission. In September, BPEarthWatch published a video showing “brand new, hi-res” images. Taken from the Rosetta spacecraft, they appeared to show two UFOs flying over the comet and a transmission tower-like structure built on the surface, potentially emitting the mysterious radio signals which have been picked by the ESA. “These images are not normal,” says the video voiceover.

The ESA’s confirmation that the comet had been emitting a “mystery song” has fuelled theories that it is in fact an alien ship and the warbling is an extra-terrestrial attempt at communication. 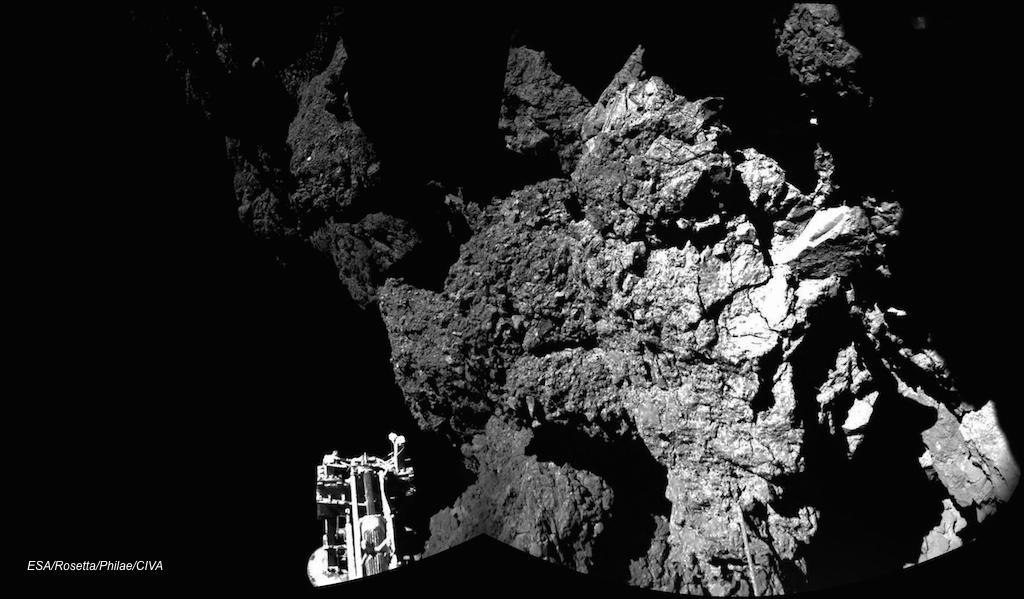 The batteries aboard the European Space Agency’s Philae comet lander drained Saturday, shutting down the washing machine-sized probe after an adventurous and largely unscripted 57-hour mission.

Photos and other data relayed by Philae show it landed against a cliff or crater wall where there was little sunlight to recharge its batteries. Racing against the clock, scientists activated a series of automated experiments, the first to be conducted from the surface of a comet.

Before dying, Philae defied the odds and radioed its results back to Earth for analysis.

Its last task was to re-position itself so that as the comet soars toward the sun, Philae’s batteries may recharge enough for a follow-on mission. Scientists are particularly interested in learning about the chemical composition of any organic molecules in samples drilled out from the comet’s body.

Comets are believed to be pristine remnants from the formation of our solar system some 4.6 billion years ago. They contain rock and ice that have preserved ancient organic molecules like a time capsule and may provide insight into how the planets and life evolved.

Rosetta in August became the first spacecraft to put itself into orbit around a comet and it will accompany the comet as it travels toward the sun for at least another 13 months.

I was looking around at more articles relating to the incredible historical scientific achievement that is the the European Space Agency’s Rosetta space probe lander Philae touching down on a comet 300 million miles from Earth when I came across this:

Is this an example of satire? A hilarious parody of modern internet feminists? I assumed it was satire at first glance, given the fact that humans have just LANDED A SPACECRAFT ON A FUCKING COMET! The amount of effort it takes to even get a rocket into low-Earth orbit is mind-boggling,  this is a truly historical human achievement. Yet, this article (sadly it’s not satirical) only cares about the dude’s shirt?

Not since the days of the moon landing has humanity made such an achievement. Do I think he should have worn a different shirt? Of course, look at that thing, it’s tacky as all hell. But who cares? I can assure you that no-one in the scientific community cares. They’re focusing on the incredible achievement that they’ve just accomplished.

I also highly doubt that the women in STEM fields would  give two shits about what anyone wears either. They’re above it. The very idea of women being kept out of science because of a freaking shirt is lunacy.

Seriously, if someone wearing a shirt that “offends” you is enough to keep you out of science, then you’re too much of a crybaby to leave your parent’s house unattended, let alone pursue a career in any kind of STEM field.

“I don’t care if you landed a spacecraft on a comet, your shirt is sexist and ostracizing”

These social justice fundamentalists need to seriously reevaluate their priorities.

Update: The Young Turks agree with me. So checkmate.

Today, on a frigid space rock half a billion kilometers from Earth, history was made.

The European Space Agency’s Rosetta space probe has deployed its robotic lander Philae, which touched down on Comet 67P/Churyumov-Gerasimenko.

Philae landed on an area called Agilkia, using harpoons and screws to latch on to the surface. Plans call for Philae to collect samples and take measurements of the comet to help determine its composition and origin. The comet, which is about four kilometers in diameter, is located halfway between the orbits of Jupiter and Mars.

I Wrote a Book!