The color-enhanced image comes from Kevin M. Gill, a NASA software engineer who moonlights as one of the Juno’s amateur image processors, shows a large circular storm trailed by clouds swirling in a jet stream in Jupiter’s northern hemisphere. 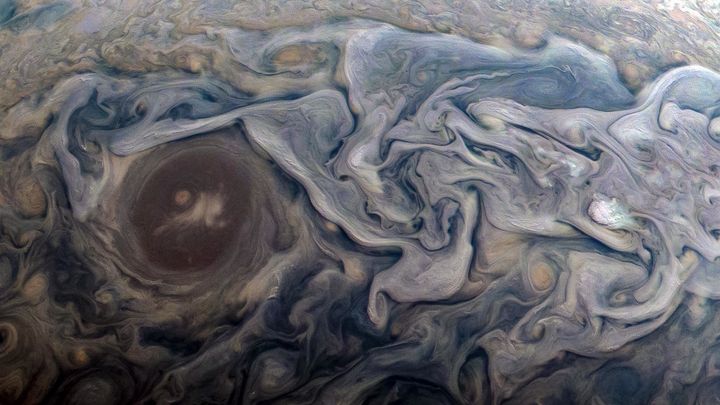 Juno has been in a highly elliptical orbit around Jupiter since 2016. The spacecraft captured the image on Feb 12, during its 18th close pass of the planet. Juno was just 8,000 miles above Jupiter’s cloud tops at the time.

First launched in 2011, Juno took five years traveling to Jupiter from Earth. The mission seeks to map Jupiter’s interior and determine how much water is inside the planet, among other goals. Scientists hope that by studying Jupiter, they will have a better understanding of how the planets formed.

NASA makes raw images from Juno available to the public online. The agency encourages amateur astrophotographers to download and enhance the images before uploading them back to Juno’s website. Dozens of space enthusiasts have participated, some by simply cropping the images and others by performing advanced color reconstruction or highlighting a particular atmospheric feature of the planet.

NASA plans to end Juno’s mission in July 2021, at which point the spacecraft will self-destruct in the most metal way by hurling itself into Jupiter.